Ah. Finally able to sit down in our new, settled-in apartment with a cup of coffee and write.

We have been in the new place for a month now and I am pretty much in love with it. It was really fun to decorate, but 600 square feet did take some getting used to.

After a stressful moving weekend and having had family around for a couple weeks, we decided it was time to take the trip down the coast we’ve been dreaming of. So we did. We packed up the car on a Saturday morning and started driving. The unplanned trips often turn out to be the best ones.

We left pretty late in the day, so I would recommend leaving a bit earlier, but everything worked out just the same.

We left Bellevue and headed for Astoria, OR.You could always drive I-5 the entire way, but we chose to drive highway 101. It was a much more scenic drive and only took about 15 minutes longer. We made one pit stop at Cape Lookout State Park, Oregon. There are trails to be hiked here along the ocean. We did not have time, but if you left earlier in the day, it would be a nice 2-3 mile hour and dog-friendly! There are also some randomly placed sand dunes if you’re into “sand-sinking”

Next stop: Astoria. Home to all The Goonies sites and a beautiful bridge. There is a rest stop of sorts just east of the bridge off Highway 4. The boys enjoyed a short break from the car and we got some photos.

By now it was about 6:30 p.m., leaving just enough time to drive to Cannon Beach to witness the sunset. In true household tradition, we packed a cooler and some sweaters and picnic-ed on the beach. For being such a popular beach, there was plenty of room for everyone. The dogs got to enjoy the sand, we saw some birds, did some yoga and reminded ourselves that every now and then, we just have to put a pause on real life. 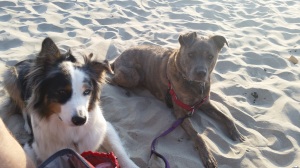 After dark, we continued our drive to Tillamook, OR. Given that we decided to visit Cannon Beach in peak season, there wasn’t much available for hotels or camping, or it was too expensive to be logical. Tillamook is just 45 minutes south of Cannon Beach and they have a Shiloh Inn. Big rooms, full hot breakfast, mini-kitchen and dog-friendly at an affordable price. I’m always in for that!

Tillamook is home to the cheese factory (of course!) and some other attractions, but we used it as a sleeping point. We woke up to a hot breakfast, bought some terrible drive-thru coffee and started our day.

Apparently in this stretch of beach, it is legal to drive on the beach. Since we recently purchased our first Subaru, we absolutely had too. It was so early that the beach was basically deserted, so the boys got some fetch time in as well. Someone else got their car stuck, but not us! Go Subuaru! We even got to use its “off-roading” feature. 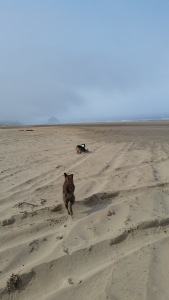 Devil’s Punchbowl State Park. It is best to see this park at low-tide or high-tide. Anything in the middle just isn’t as exciting. We tried for low-tide, but got there a bit late. We were still able to explore some tide pools, but at low tide, you can actually walk in to the punch bowl. Amazing. By the time we go there, the ocean had risen too high to do so. Rogue pretended he was on pride rock and Awo enjoyed the cool, wet sand.

Being close to Newport, OR, we couldn’t miss out on one of our favorite breweries, Rogue Brewing. Hence, the name of our Aussie. The brewery is not dog-friendly, but many of the public houses are. Since we have a couple of dogs with uncertain social skills, we parked far from the entrance and left the windows down. (It was a cloudy day and only about 65 degrees)…Keep in mind how hot your cars get when its warm and sunny when leaving dogs in the car.

From here, we traveled south to see the Spouting Horn and Thor’s Well. It is truly beautiful to see nature this way. The ocean created them on its own and what you see is never quite exactly the same. We walked around and took some photos. There are some short hiking trails here as well.

After stretching our legs, we started what would now be a 6-hour journey back home.

Thats how you see the Oregon Coast in just 2 days.